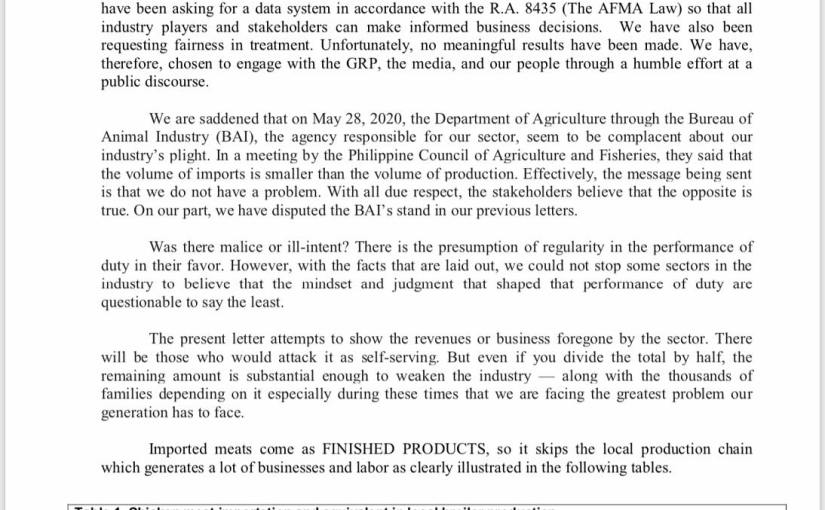 In an open letter desperate for public support, the United Broilers and Raisers Association (UBRA) and the Philippine Chamber of Agriculture and Food Inc. (PCAFI) said they have been compelled to present evidence-based quantifiable data amid recent Department of Agriculture (DA) response to its pleadings against imports.

“We are saddened that on May 28, 2020, the DA through the Bureau of Animal Industry (BAI), the agency responsible for our sector, seems to be complacent about our industry’s plight.  In a meeting with PCAF, they said that the volume of imports is smaller than the volume of production,” said Lawyer Jose M. Elias Inciong, UBRA president.

Also signatories to the letter are PCAFI President Danilo V. Fausto and a growing number of nearly 50 other private agriculture association leaders.  PCAF stands for Philippine Council of Agriculture and Fisheries, a public-private group hosted by DA.

“The message being sent is that we do not have a problem.  The stakeholders believe the opposite is true.”

Sacrificed jobs are huge as “imported meats come as finished products, so it skips the local production chain which generates a lot of businesses and labor.”

Other authorities, mainly DA officials themselves, continue to question UBRA’s claim on the significance of import volume in order to obliterate the Filipino poultry sector.

“But even if you divide the total by half, the remaining amount is substantial enough to weaken the industry—along with the thousands of families depending on it especially during these times that we are facing the greatest problem our generation has to face.”

Reduced dressing operations of 287.61 million heads totaled to a loss of P2.88 billion and by product, P5.18 billion.

Another UBRA-PCAFI petition as sanctioned by Republic Act 8435 or the Agriculture and Fisheries Modernization Act (AFMA) is a data system that will enable stakeholders to make informed decisions. Melody Mendoza Aguiba