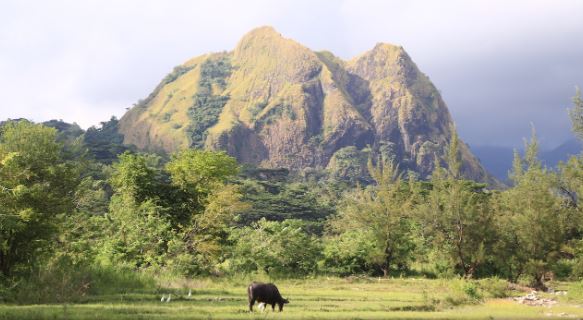 The government has stepped up a campaign to save the critically endangered Tamaraw and its equally endangered habitat, the  Mt. Iglit-Baco National Park (MIBNP), an ASEAN Heritage Site, even as conservation funds shrank in light of the Covid 19 pandemic.

.   The Department of Environment and Natural Resources (DENR), together with the Biodiversity Finance Philippines (Biofin), has sustained a program to conserve the Tamaraw (Bubalus mindorensis) even as poachers have taken advantage of the government travel restrictions due to the pandemic.

Not only is Tamaraw a rare dwarf buffalo (four feet tall at the shoulders) found only in Mindoro Island.  Its decrease in population became alarming since the 1900s.  Tamaraws are one of the 11 remaining wild cattle species of the world.   The Mt. Iglit-Baco, its habitat, has also gone through serious deforestation with less than 3% of primary forest preserved.

“Sadly,  Now, only 23 TCP (Tamaraw Conservation Program) rangers and three MIBNP wardens are expected to patrol a core area of 2,500 hectares inside the 106,655 hectare MIBNP, which hosts at least 480 of the world’s 600 remaining tamaraws,” according to the DENR.

The “Together for Tamaraw” campaign is supported by the United Nations Development Programme (UNDP), the DENR’s office in MIMAROPA (Mindoro, Marinduque, Romblon, Palawan), and the DENR’s attached agency Biodiversity Management Bureau.

The International Union for the Conservation of Nature (IUCN) has classified the Tamaraw as a critically endangered species, the highest level of threat on conserved flora and fauna.

From a population of 10,000 Tamaraws in the 1900s, the buffalo recorded a slump in population to 120 in 1975, largely owing to poaching and illegal trade.

With conservation efforts, its population rose to 370 in 1987 and to its present population of 600.

The endangered buffalo benefited from having been globally recognized as endangered.  Countries that are signatory to the  Convention on International Trade in Endangered Species (CITES) of Wild Fauna and Flora contributed to preventing its illegal trade.

Tamaraw’s endemism in the Philippines is indicated in its name mindorensis, with “ensis” the Latin meaning it belongs to the island.

DENR reported that 35 countries have cooperated in the Together for Tamaraw online fund raising endeavour.

There is now a 10-year Protected Area Management Plan for Mt. Iglit-Baco.  The plan integrates efforts of the indigenous people (IP) and their cultural and development needs as part of the conservation of Tamaraw.

Part of this is to secure the rights of the IPs who have ancestral domain rights over the protected area.  As such, it strengthens their right of the IPs to protect the mountains and its endangered animals against cattle ranching and wildlife poaching.

The natural park  encompasses “large tracks of the ancestral lands of the Tau-buid and Buhid indigenous tribes, making them key stakeholders in any decisions related to management of the park,”  according to the Global Wildlife Conservation (GWC).

The Tau-buid and Buhid Indigenous People have participated in the zoning, management planning and Population and Habitat Viability Assessment (PHVA) workshops for the conservation of Tamarw and MIBNP.  (Melody Mendoza Aguiba)