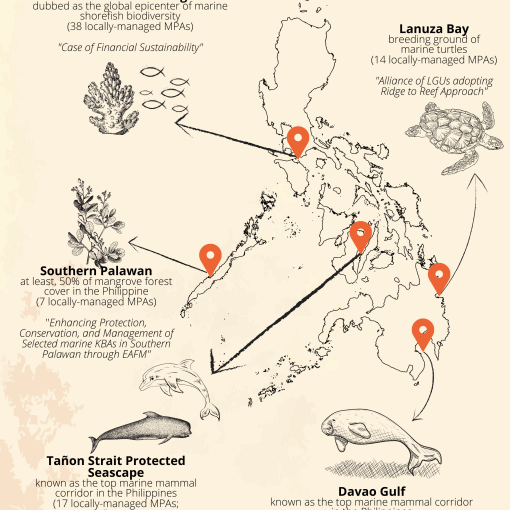 A Joint Memorandum Circular between the Department of Environment and Natural Resources (DENR) and two other state agencies is expected to strengthen the establishment of marine protected area networks (MPAN), restore damaged coastal ecosystems, and enrich coral reefs and marine habitats.

This policy mandates collaboration between DENR, the Department of Agriculture (DA), and Department of Interior and Local Government (DILG) in improving the coastal and marine environment through cooperation.

“The eventual approval of the joint (DA-DENR-DILG) policy guidelines on the establishment and management of MPANs will be valuable in biodiversity conservation efforts,” according to Dr. Vincent V. Hilomen, SMARTSeas PH national project manager.

The JMC ensures that biodiversity conservation is given priority equally along with economic development.

A joint effort of DENR, DA, and DILG will help government hurdle the difficulties of putting up Marine Protected Areas (MPA) and MPA Network (MPAN) amid coastal residents’ usual opposition against these.

MPAN is a collection of individual MPAs or reserves operating cooperatively and synergistically under the SMARTSeas.

“One of the greatest challenges that we are experiencing in establishing MPANs is still the acceptance of the community. There are several instances where the communities resist to set aside a portion of their waters for protection purposes because they think that access to their fishing areas will be limited,” said Hilomen.

It is imperative that government capacitates its MPA/MPAN workforce to empower them in harnessing cooperation from communities in establishing the MPA/MPANs.

The DENR’s SMARTSeas PH project or Strengthening Marine Protected Areas to Conserve Marine Key Biodiversity Areas in the Philippines is funded under a $28.53 million co-financing scheme between government and the Global Environment Facility (GEF). It also received a GEF grant of $8 million.

The SMARTSeas PH has so far capacitated at least  70 key DENR regional and field staff through online distance learning.

This is the first-ever of its kind capacity building activity in the DENR.  The increased competencies included identification and approaches to resolving threats to the marine environment.

The establishment of three MPANs led to the development of nearly 90 management bodies of MPAs and MPANs that have demonstrated increased competencies for management effectiveness.

SMARTSeas has also developed a better monitoring and evaluation system for MPAs and MPANs which provided an important guide to monitor management progress across the country.    Protection of coastal ecosystems under the MPA includes patrolling, surveillance of habitats, conduct of direct activities and repair of signages, other facilities, gears and equipment. Melody Mendoza Aguiba

The DENR-SMARTSeas PH Project was a six-year initiative of the DENR-BMB. With support from the United Nations Development Program (UNDP) and the Global Environment Facility (GEF), the project aimed to accelerate the establishment of MPA and MPANs to include more marine key biodiversity areas (KBAs) in order to reduce and arrest the rapid degradation of marine and coastal habitats.

The project established biodiversity friendly enterprises (BDFEs) for people’s organizations (POs) who manage their MPAs and established a co-management model as a revenue mechanisms from impact investments to sustain and cover management costs; and enabled a policy where science-based conservation strategies of marine biodiversity are ensured.

The uniqueness of each site as a marine KBA resulted to different storylines, but aiming at achieving the same goal.

During the implementation, the project facilitated the establishment of three MPANs, adding 1.8 million hectares of the sea under a form of protection and enclosing an additional 17 marine KBAs.

The project established 33 BDFEs in accordance with the DENR guidelines — 21 of which were provided with Low Value Grant support to POs, capacitated and deputized 220 Bantay Dagat through the Bureau of Fisheries and Aquatic Resources (BFAR).

It also leveraged at least P 2.9 billion worth of support from the private sector and local government units, and enabled institutionalization of a more inclusive and integrated MPA and MPAN framework through local and national policies.