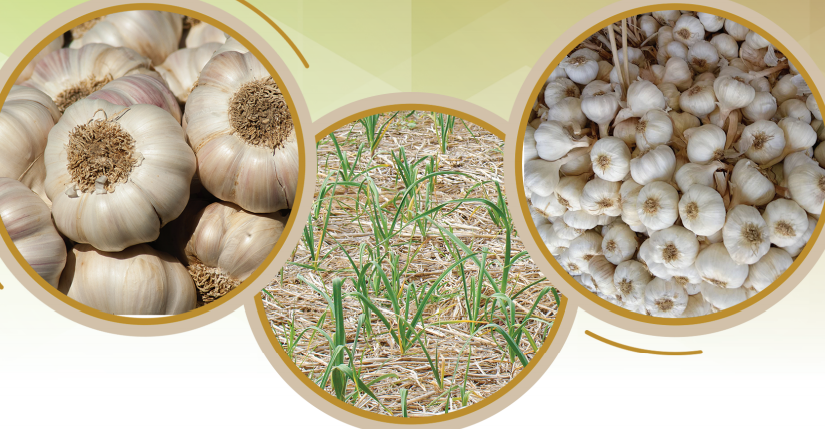 An improved native garlic variety, the Batanes white, is seen to raise Philippines’ garlic production having yielded the highest 4.9 metric tons (MT) per hectare, even posting a yield as much as 9.3 MT in a second crop in Pasuquin, Ilocos Norte.

The Department of Agriculture (DA) in Ilocos Region (Region 1) has crafted a revival program to raise garlic sufficiency as current supply is largely imported— more than 90%.

Field tests have shown native garlic varieties can catch up in competitiveness with imported garlic which has been hitting a yield of a high of 10 to 15 MT per hectare such as that in China.

Remarkably, the improved native garlic has shown competitive yield potential in a “second crop” known to be more ideal to garlic planting.

“Two cropping of garlic per year is an economic and production potential when planted as direct seeded on September 15 for the first crop and December or early January for the second crop in upland areas of Pasuquin where there is adequate supply of irrigation water,” reported a study led by  the Southeast Asian Regional CEnter for Graduate Study and Research in Agriculture (SEARCA).

This is in partnership with the DA Ilocos Norte and Experiment Station led by Dr.Wilhelmina P. Castaneda and Bureau of Agricultural Research (BAR).

Garlic yield increased from 3.402 MT s per hectare during the regular season to 9.3 MT  per hectare.

Among the native varieties that have been improved, Batanes garlic produced the highest average yield in the field tests in the Ilocos towns of Pasuquin, 4.9 MT per hectare; Bacarra, 3.139 Mt; and Batac City, 3.39 MT.

Gross income from the improved garlic variety reached P602,400 per hectare per cropping.

Given a two-season per year planting, income can reach P650,000 per hectare per year..

SEARCA through its Emerging for Innovation for Growth Department (EIGD) is promoting this technology-based innovation among local enterprises. It is under its Eleventh  Five-Year Plan focused on Accelerating Transformation Through Agricultural Innovation (ATTAIN).

The feat of raising Philippines’ garlic sufficiency level is possible through a “package of technology” developed by SEARCA-BAR-DA Region 1.

“Results of cost and returns analysis showed an increase in net income with application of gibberelic acid at 36 and 56 days after planting at P104,823 per hectare compared with no application at all at P48,363 per hectare.

“These results support earlier research findings (Castaneda et.al, 1996) wherein application of gibberelic acid resulted in an increase in garlic yield by 56%, resulting in a 66% rise in net income per hectare,” according to the SEARCA-BAR-DA R1 study.

Another key to raising yield is the use of organic fertilizer.

“Organic fertilizers work double duty by providing required macro and micronutrients while improving the physical, chemical, and biological properties of the soil. A  balanced blend of organic fertilizer provides nutrient sources for important beneficial microorganisms and earthworms living in the soil.”

The application of 5 MT  of commercial organic fertilizer with the recommended inorganic fertilizer (based on soil analysis) to garlic seedlings  produced a potential yield of 9.67 MT per hectare , according to a Castaneda study.

This is compared to the conventional method of establishment with 5.32 MT per hectare.

The Philippines is far from achieving garlic self-sufficency level. In 2018, the country’s self-sufficiency level was reported to be only at 9.02%.

The native garlic varieties are smaller compared to the imported types that flood the market.  But they are better-tasting and aromatic.  These produce a stronger aroma when cooked.

The Ilocos Region is the largest garlic-producing region in the Philippines, contributing more than 65% to the country’s total production.

It also has the best comparative advantage in garlic production because of its agroclimatic suitability.

However, the region experienced a decline not just in volume of production but also in the area planted and harvested for garlic in the past several years due to competition.

The downward trend in productivity is also attributed to low-yielding varieties and high postharvest losses.

There is a renewed interest in garlic farming because of the increasing domestic demand due to the many uses of garlic.

Garlic is valued in the food, pharmaceutical, and even in the cosmetics industry. Other intended technology adopters are local farmers who are still using traditional farming practices in garlic production in the Ilocos Region, Southern Tagalog, and Central Luzon region.